Every artist hopefully has a response to the surroundings they live in, using different mediums and techniques to recall the environment they live in. Fellow King’s Lynn artist Phil Barrington, observes and records his environment by using photography, narrative and mixed media. Often focusing on the darker elements of life in a small rural town, where decay, financial hardship and hopelessness hit communities hard, his images are often striking, disturbing yet beautiful and always deserving of comment and discussion.
You can find out more about Phil’s work on his website www.barringtonarts.com and his Facebook page: www.facebook.com/BarringtonArts
What is your background?

I am a conceptual artist who was born, and still lives, in East Anglia, England. Ever since I was a small child (in the vulgar 1980's) I always had a passion for art, and for art history. Throughout my childhood I liked to draw, predominantly, but also to make makeshift bootleg VHS sleeve collages for "video nasties", underground films and banned movies. There is very little juvenilia left in my archives to see today, but the one or two examples that remain point to a more dark and surreal direction. Because I always had such an interest in art, I was ludicrously arrogant enough to side-line fine art degree courses (what could they teach me that I couldn't have the joy of finding out for myself? etc.) and had chosen, instead, to study a BA in Humanities - majoring in Sociology, but also
with an interest in classic romanticism. In February 2007 my mother died and, now with glorious hindsight, I feverishly worked through my grief by loitering around abandoned / gutted factories and assorted disused industrial buildings, taking a camera or two along for the ride. Thus the cathartic outpouring began. 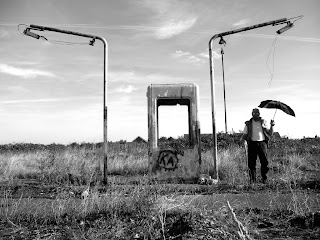 What mediums do you work with?
Creative photography, acrylic and spray paints, mixed media elements, household chemicals, blood (my own, of course), creative writing, video, sound, prosthetics, and some graphical work. Oh, and marketing (never underestimate marketing as a medium in its own right). 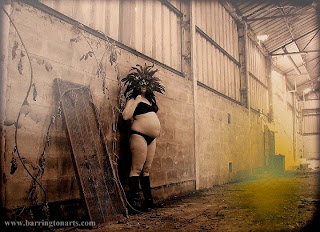 What other work do you do?
I am currently in my last days (hopefully) of doing contractual work for local publications, websites and regional magazines that are supposed to attract visitors to the local area. Chances are, if you have seen any printed magazine or website page by the local Borough Council, you would have seen some examples of my (uncredited) bog-standard street photography. 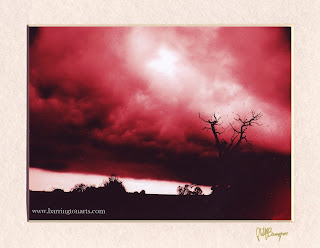 How do you market yourself?
In many ways - via press packs and merchandise (ie trashy novelty freebies) for possible interest from publications, printed campaigns such as good old-fashioned posters and invite cards, social media such as blogs and facebook pages, viral trailers and documentary films, and through my website;www.barringtonarts.com 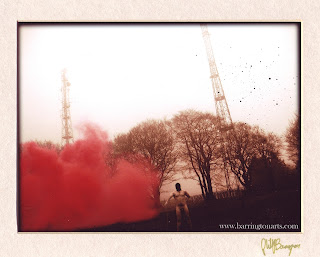 Where do you sell and exhibit?
I sell in galleries, and online through my website (I won't plug it again - I'm not THAT shameless. Or am I?). Physically speaking, I have exhibited solo shows in galleries in King's Lynn, Norwich, and Cambridge. This year I am concentrating on getting my new work out into the public realm via an online campaign (through crack-town.blogspot.com and via my facebook page), but am squeezing an exhibition of my new work in at the Brick
Lane Gallery in London in late July (more news of that to come on my facebook page). Also, some exciting ideas of new ways for exhibiting my work are rattling around in my tired head at the moment, but nothing I can verbalise right now.
How do you see your work developing?
Bowie said that, in hindsight, for every album he has ever done, at least one song on it points to the next album for him. Judging by the effect that some of my recent works has had on me, I think I shall more finely develop, and more conspicuously use, mixed media elements - probably to the point where the original photograph is barely seen at all. Maybe even develop my style into doing photographic works without using a camera.
Who are your heroes?
Calling Francis Bacon a hero implies that he somehow had special powers. Which, of course, he had - but he never fought crime with them. Joel-Peter Witkin cannot be ignored, nor can the whole transgression movement of the 1980s, nor the art of David Lynch. 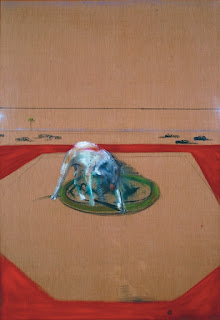 If you could steal one piece from a gallery what would it be?
Being only down the road from me, I'd break into the Norwich Sainsbury Centre in the early hours and smuggle out as many of their Bacons as my greasy mitts could carry. Hmmm...I shouldn't have told you that.
If that plan fails, then I'd squeeze into the queue of burglars outside the Oslo Munch Museum and wait for my turn to steal The Scream.
And if THAT plan fails (my plans often go tits-up), then I'd just storm into Baudoin Lebon and nab Witkin's 'Ars Moriendi'.
What books and blogs can't you live without?
The Victor Bockris biography of Warhol. The 'Anatomy of an Enigma' Bacon bio. My (personally signed) Witkin brochure from a 1980's US exhibition. And any personal blog written by any citizen of a war-torn country.
Phil Barrington
www.facebook.com/BarringtonArts
www.barringtonarts.com
www.crack-town.blogspot.com
www.abandonallhopenow.blogspot.com
Posted by Mangle Prints at 03:55

A great interview. This helps me to understand your work so much more Phil. The work of Bacon in the Sainsbury Centre is interesting as although there are pieces that have a dark, surreal side to them, there are others, which are almost observational portraits, that are much more sedate and seem to show another side to him. Do you find this side of his work intriguing?

Thank you for your kind comment. Oh, yes; amongst the screaming popes, man-dogs and assorted grotesquerie, I do also love the fleeting moments that he captures, between fractions of time; Bar scenes, people standing/sitting awkwardly, turning at the last moment.

Simplistically speaking, the painterly equivalent of a person moving into a blur just as a photograph is taken. Thus, his portraits really capture an unstaged moment and you can only assume that their character has been caught more authentically as a result (the same as when a candid, unplanned shot from a wedding party is much more honest and real than a staged 'Bride & Groom' photograph will ever be).

Although I don't currently want to capture a person's character in such a way myself (the people inhabiting my work more of a conceptual symbol than real personas), I do think that that element of his work is amazing and, probably, never to be bettered.

I could write reams about Bacon, all of it unoriginal analysis, so will stop here! :o)

And thank you too, Anonymous. Thats a very popular political name these days! ;o) PB x

please enter the link . If you need any brochure design please contact us

Desert Safari Dubai provides a variety of all comprehensive packages for distinct types of desert safari, Our desert safari involve many varying options like dune buggies and quad bikes.

If you are searching for your favourite celebrity net worth then visit our website for all celebrities related to entertainment, Sports, Tech and all other famous personalities

you want to Get a trade license in dubai Without an Office- but how? This blog will inform you on the entire process of get a Dubai trade license.

Do you want office Space for rent in Dubai? Get Affordable Business Center Dubai With Spiderbc.

Mangle Prints
Welcome! Amanda Colville is a printmaker and artist with a passion for all things print, pattern and colour. Using an old washing mangle as a printing press, she creates linocut prints and artwork from her home in Norfolk. Contact: amandaacolville@aol.com

As much as it's wonderful to share images, please be considerate and note all artwork is under copyright of the original artist.